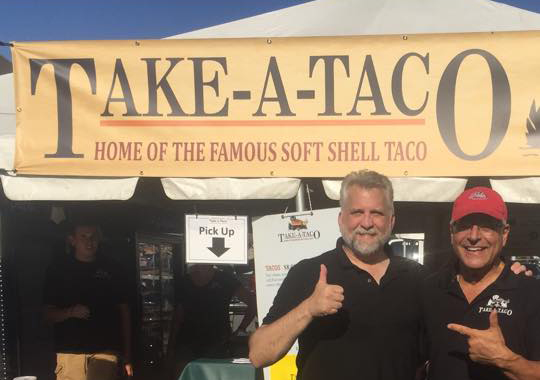 Take at Taco is known for its soft shell taco at festivals and events in and around the Lehigh Valley. Pictured above is Take a Taco owner George Pitsilos (right) with actor, writer, and producer, Daniel Roebuck (left), a Bethlehem native and best known for his role in the Fugitive and most recently Saving Grace filmed in Bethlehem, PA

Festivals we Participate in Yearly:

Allentown Fair vendor since 1979 with 2 locations at the fair –
a 7-day event beginning the Tuesday before Labor Day in Allentown, PA

Musikfest vendor since 1989 with 2 locations at the event –
a 10-day event the first week of August in downtown Bethlehem, PA

Celtic Classic vendor since 1992 –
a 3-day event the last weekend in September in Bethlehem, PA

West End World of Food Festival vendor since its inception in 2015 –
a 1-day event in September in Allentown, PA