Take at Taco, famous for its soft shell taco, began as a restaurant under the ownership of George Pitsilos in 1977. With the restaurant’s single location on Fullerton Avenue in Whitehall, George, fresh out of college, enlisted the help of his mother, who was of Greek decent, to create new concepts and flavors. George’s mother was instrumental in developing the secret recipe of seasonings used in Take a Taco’s meat still today and she also was the creator of its Cinnamon Strips.

In 1979 the Pepsi delivery driver for Take at Taco encouraged George to be a vendor at the Allentown Fair. After George agreed to give it a try, the driver was able to secure a stand for Take a Taco. The fair proved to be profitable and it was the start of a long yearly tradition for Take a Taco.

In 1989, as a way to promote the restaurant’s move from Fullerton Avenue to Grape Street, George decided to be a vendor at a Musikfest – a fairly new and unknown event at the time held in downtown Bethlehem. George’s idea of a promotional stint turned out to be a good and lifelong business venture.

In 1992 George added the Celtic Classic in Bethlehem to the schedule of festivals. With a 10-day event in August, a 7-day and a 3-day event in September, and a restaurant; Take a Taco had a great presence in the Lehigh Valley.

In 1997, tired of the daily grind of the restaurant business for the past 20 years, George closed the restaurant to enter the corporate world in the hotel and hospitality industry. George, still wanting to carryon the tradition of the famous soft shell taco for his loyal fans, took time off of work each year to continue as a vendor at the three established local events. Without a restaurant, loyal fans would not only come once but sometimes daily to the events to get their Take a Taco “fix.”

In 2015, to his list of festivals George added the brand new West End World of Food Festival, a 1-day June event in Allentown. George wasn’t able to take time off of work to be at the festival, but had enough time to setup for his staff to run. This also proved to be a worthwhile event.

As George continued working in the corporate world and saw the growth of the food industry coupled with how his loyal fans continued to pursue Take a Taco, he had a concept in his mind that wouldn’t escape him. George wanted to re-enter the Take a Taco business full-time but with a food truck.

In 2016 as he planned for his food truck to be fabricated, he added private and corporate catering services to his offerings. With the new catering services, George added an array of new offerings including appetizers, burgers, steaks, and delicious desserts. 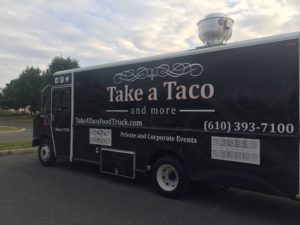 In May of 2018, after a long journey of fabrication to have the best possible food truck, the Take a Taco food truck hit the road. Since the food truck’s inception,  the addition of catering services, and the continuation of the festivals, George hasn’t had anytime to rethink his decision. His time and talents have paid off but not without the help of other talented individuals and support staff.

The menus will continue to evolve and grow just as the client’s desire for scrumptious food does. Take a Taco’s ultimate goal is to provide an array of unforgettable offerings to keep the customer returning for more.